I agree with you that the past should be forgiven. But that doesn’t mean it should be forgotten so the same mistake won’t happen again. Neither should history be denied.

Just like you, I want to be with friends with people from different backgrounds. Sure I’ve met some “bad apples” in particular groups of people, but if you think about it, there are even worse people in my own group of people as well (and same goes for every background).

I’m not going to judge an individual because a group of people are rotten tomatoes.

“TIME HEALS ALL WOUNDS”, an old adage reads. But its universal message of mutual forgiveness and putting one’s differences aside for the greater good—however idealistic that may sound—has once again come to another stalemate. Over the summer, tensions have once again been brewing in East Asia as three nations—China (the People’s Republic), Taiwan (the Republic of China) and Japan—go head-to-head—quite literally, I might add—over the possession of a small chain of islands known as Senkaku (尖閣諸島) to the Japanese and Diaoyutai (釣魚台) to the Chinese on both sides of the Taiwan Strait.

The islands’ location is right smack-dab in between Okinawa Prefecture and Taiwan, which should explain a lot in itself, for those of us interested in studying East Asian affairs. The ongoing rivalry, as I have been reading the latest headlines for the past month, first started over noticing potential oil and mineral deposits found underneath and around the islands as well as commercial fishing vessels of all three nations wanting to have the autonomy to fish there.

American, Chinese and other international websites alike have been reporting news on the occasional Taiwanese or mainland Chinese fishing boats being sprayed at and publicly “denounced” by the Japanese Coast Guard over the past two months. And at this point in time, both sides have yet to come to a well, thought-out and genuine compromise.

To the best of my knowledge, a lot of social networkers have been continuously posting derogatory remarks towards either party on sites like YouTube, Facebook and ChinaSmack—several who want to instill nationalistic pride towards their own respective country by claiming either side is displaying a fierce warmonger stance or the likes of it.

Now, I do not mean to belittle anyone but I am proud to be an American Taiwanese. When I first read news reports of Japanese Coast Guard vessels attempting to shoo away Taiwanese ships near the islands I will be honest: I did start tensing up a bit in a fit of inner rage.

But as international headlines continue to document the growing anti-Chinese and anti-Japanese sentiment in the region since August and September—with numerous protests erupting in mainland China, targeting Japanese car manufacturing companies and thousands of Chinese chanting “The Diaoyu Islands are Ours!”—across the sea in Japan, many fervent Japanese are also taking to the streets booing China’s Communist government and allegations of internal political strife as Premier Hu Jintao is currently stepping down from office.

In the context of the times, although I am proud to proclaim I am ethnically Chinese and nationally American, the growing sentiment that is currently taking place half way around the world gave me some time to reflect on the potential possibilities of actually talking to some Japanese Americans in open dialogue about the issues at hand. See how they view the whole ordeal.

Lo and behold, I have had the wonderful opportunity to do so in the past few days this week. Among the handful I have managed to briefly talk to though, most of their responses usually were something along the lines of, “It’s a sensitive issue so I sort of feel uncomfortable to really talk about it.” Which I, deep down, can totally understand.

Add historical tensions into the current dispute, with many claiming the Japanese not having fully pardoned their imperialistic intentions during the Second World War… well, it just adds dissent on top of an even larger and wider ongoing dissent spanning eight decades of history.

Whether friend, foe, or neither, my Japanese acquaintances advise me to look not so much into the past in order to recall where our disputes between our two countries and peoples started from, but to look to a future of peace and hope. And frankly, I can’t really disagree with them solely on that point either.

Coincidentally, I decided to compose this column today in honor of the 101st anniversary of the Wuchang Upising, an event commemorated by both Chinas across the Taiwan Strait. It was on this very day one hundred and one years ago, discontent lit the spark that would eventually culminate in a series of events that would lead to the successful overthrow of the Qing dynasty, and thus, the Republic of China was founded upon the ashes of the former imperial government. 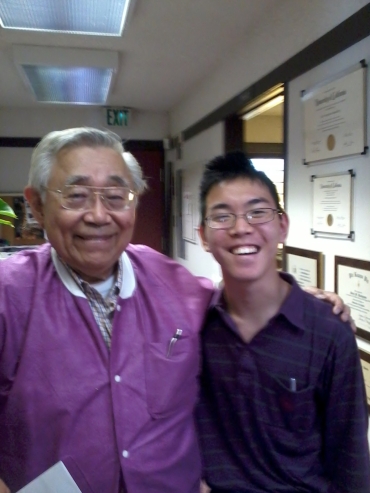 Even sixty-seven years after the end of World War II, our once erstwhile adversary is now a friend to Taiwan (for the most part).

While meeting my new dentist on Monday, Dr. Walter Hashimoto cheerfully exclaimed that the Taiwanese love Japan as I politely nodded my head. But I think I got through to the old man’s heart when I mentioned the late Generalissimo Chiang Kai-Shek’s name, since Chiang apparently is still respected in Japan, especially among the older generation.

Hashimoto replies with a broad smile on his face, “We [Japanese] call him Shō Kaiseki (蒋介石)” as I’m pretty sure Walter starts to notice the glow on my face as well.

May the Republic continue to prosper and God bless the Generalissimo! 😀